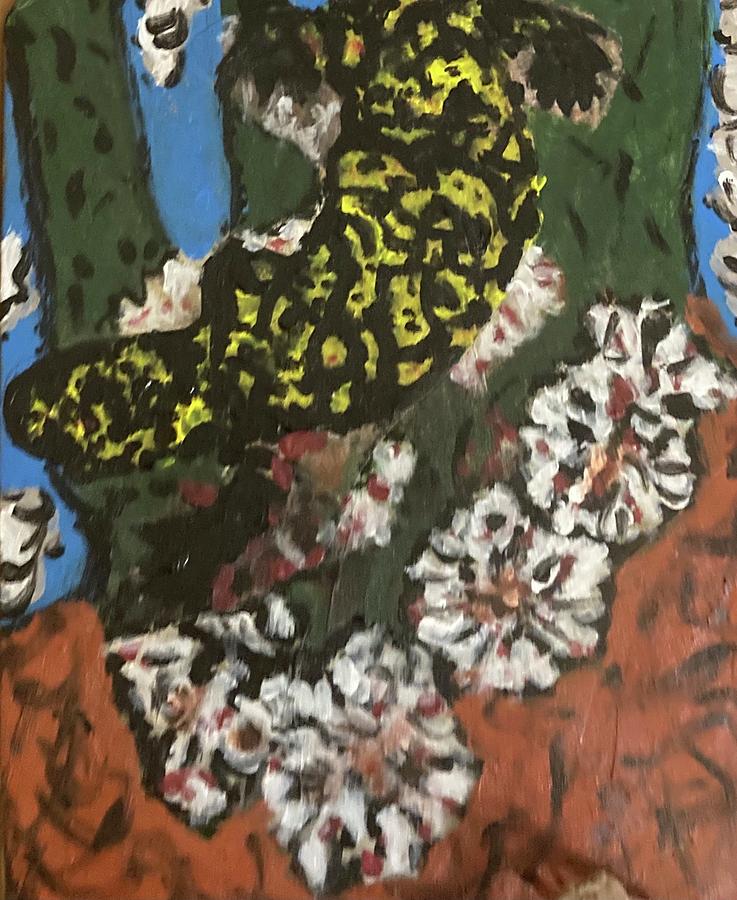 This is from a series a radio DJ commissioned from me for 50 dollars. He is KALX Berkeley radio's Jon the Reptilian. Jon has a garden and he wanted tiles painted with desert flowers, cacti and lizards, so that's what I painted for him. He used to go watch my band play, and would play us on college radio, and still does to this day. He gives great interviews of musicians. Everybody from Adrian Belou to nobodies like me. He is a devotee of music, and has his own band named after a species of lizard called Uromastyx. He had a legal fight about the rights to name his band Uromastyx with some old has beens from the '70's I believe it was Styx. Some people believe that, like they own the land of the Earth, they have omnipitent control over the vowels and consonant sounds their mother gave them, mother Earth that is. They don't have the confidence in their artwork, company, or brand that says their product is strong enough to withstand imposters. My band Deadweight was the first with this name. I was recording the first demo at the then bass player of Metallica's studio, and Jsason, the second bass player of the almighty metal gods name starting with M endiing with A. which some might think the acronym means Master of Arts degree, but it's short for a name of a word they came up with on their own, no help from linguists: METALLICA. Well, after Jason gave the go ahead oN the name DEADWEIGHT for my band in 1994, several bands have used the word which means cargo capacity of a ship, other bands began using the name. We were the first, and our music stands the test of time. We were the first power trio made up of electric violin, electric cello, and drums.. We played songs I wrote that spanned the genres of metal, to alternative, to R&B, blues, punk, country, and fusion. We are the original Deadweight, and we have the confidence in our original music to say fuck the other bands who stole our name, we are documented as the first who used the name to describe our sound, the first power trio of stringed orchestra instruments, the first band to have come out of the San Francisco Conservatory of Music, and the best there ever were, and there ever will be by that name and combination. We don't need a legal document to give us the sole right to use a name a Metal demi-god approved that I use. Jon the Reptilian interviewed me, and that interview is on the YouTube channel https://www.YouTube.com/bencasso GO LISTEN TO IT.